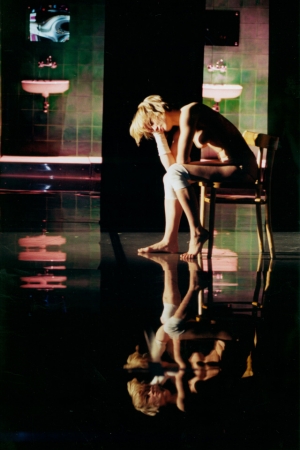 First of all, felt like being deceived right after I have entered the theatre. The drama is performed by a Polish Drama group. However, it is a production of a script written by an English female script writer. Maybe the director has changed some minor parts or the way of presenting it in order to feel more like “Polish”, but the script is not written under a Polish environment. I am not an expert of Polish performing arts. However from the few forms of arts I have encountered when I was inPoland, I would say thatPolandis a country which has suffered yet an optimistic mind is kept. It is also the reason why I saw a lot of sad or unhappy themes are used in the arts form but, especially in form of film, it turns out with a happy ending or ending with hope.


Let’s focus on the drama. It is a short drama, which lasts only 1 hour. With no interval, audience has to experience the story from the beginning till the end without a break to organize their thoughts. However, only with this situation can the audience be immersed in the full-of-tension atmosphere for the entire experience. Once there is an interval the audience will be released back to reality thus the experience is not complete. It is a compact and concise drama. There is no thank-you section at the end of the performing showing actors in reality, leaving a more comprehended experience to the audience. With the shocking ending a more significant impact is received by the audience without the thank-you section. At first it seems it is an incomplete theatre experience as it ended in a sudden. However, only under this circumstance the audience will get an intense feeling than typical theatre works with normal thank-you section. I have to admit that this arrangement impressed me and kept this experience in my mind for a long time.


Tension was built up from the first second of the story. It all started with a hard push and a scream from the protagonist, stating her discomfort and anxiety of the desire of committing suicide. The protagonist wants to commit suicide so badly for the sake of being happier. From the words of other characters we can conclude that the protagonist has been suffered from depression. However, after listening to the lines of the protagonist, you would feel that everything make sense, i.e. it is okay to die. The former part of the drama stated that the desire of protagonists to die.


She has a thousand reasons to die and she stated all out when she was taking the pills. When she fainted, a little girl with exact same outfit came out and lied down next to her. In my interpretation the little girl is her inner side. When she committed suicide, her soul is at the age of a little girl and stayed with her. There is a contrast of the age and the action of her soul when the latter part of the drama is compared to the former part, which will be discussed latter in this passage. No matter the suicide is successfully committed or not, it seems the protagonist will insist on her decision of going to die. However, her mind changes insignificantly. The change lies at the scene that the protagonist was sent to the hospital and forced the chemical treatment.


The protagonist had a very hard time during the chemical treatment. After the chemical treatment there is a change of the feeling towards “death”. The protagonist mumbled in the toilet. She called for help from God, which stated that she started to think that it is not a relief to die. Instead, she does not want to do so but sadly she cannot find a solution. The protagonist is naked in the toilet scene, telling the audience that she is in her rawest and original mind, with least protection. When she is under such mental situation she wants help, from God and from others in order to get rid of the desire of committing suicide. There is a naked old woman appeared in this scene as well. Completely opposite to the little girl who lay next to the protagonist, the old lady walk away from her, stating that her mental situation is in 80 years old (which she stated at the very first beginning that she is an 80 years old lady) and her soul is walking away from her. This is a very interesting turning point: when she wants to die, her soul is with her. However, when she does not want to, her soul is leaving her. Does it imply that even though she is alive she does not have a soul?


At the very last end, it is her solo performance. Her desperate is shown though all the shouting with the intention of wanting others to pay attention on her. However, who is she yelling at? It is the crowd as she is looking into the eyes of audience in everywhere. The sad truth is no one can help her. In order to get out the space trapping her she hit the wall which never moves. She did not stop even she bleed. The actor performed in an exaggerated movement and produced loud noise with no advance warning. The tension built from the beginning of the performance overwhelmed and passed the threshold at this particular moment.


At the end she realized that wanting to die is a trapped situation and she decided to get out. However, is she successful or not? There is a numerical count down starting at the beginning. When it comes to the end, the count down stopped at “2”. It never reaches “0”. Does it imply that the protagonist is forever trapped and not able to progress? Does it imply that the script writer herself end up sensing the same way when she died? Trapped in the undesirable reality.


One more interesting fact is, there is a frequent use of a few words, which are “love me” and “speak”. To be loved is a situation that the protagonist keeps craving for the entire journey. She also felt “alone” or ignored so she wants the words from others. It also stated that the script writer is desperate for the attention or she mocked the cold reality, showing the audience that how she perceived the world.


From determined to die, to finding redemption from God, to realizing the truth that she is trapped in the reality and no way out, this drama stated fully the mental pathway of the protagonist. We did not know the ending of the protagonist, however one thing is for sure is that she is still in tragic situation, from the beginning to the end.


If I have time, I would do a comparison of novel The death of Ivan Ilyich by Leo Tolstoy with this works as The death of Ivan Ilyich stated the change of mental situation of a dying person. At the end of Tolstoy’s novel the protagonist is rescued, or redeemed, by religious means, meanwhile the protagonist of 4.48 Psychosis is never redeemed.
23.2.2012 8pm, HKAPA Drama Theatre