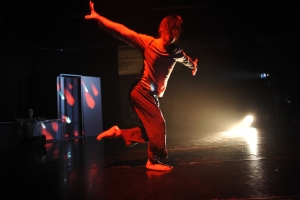 “It’s not about me, not about you, but what’s happening between us.” says dancer Celine Bacque, gesturing wildly as if to bridge our two bodies. This “human touch” was what dancers explored at their improvisation performance on September 14 at Y-Space.  Although no underlying message was agreed upon beforehand, the performance opened a window for scrutinizing human relations vis-a-vis modern city living.


A photo of the earth as backdrop, eight dancers lined up in a semi-circle pointing toward the projected image. Moving slowly into different positions- squatting, lying down, dangling on one foot or standing upside down, their bodies stayed connected in one way or another – some with a finger on another’s shoulder, some with a toe against another’s knee. This is Contact Improvisation (CI), a dance technique in which points of physical contact provide the starting point for movement improvisation.  One of the best-known and most characteristic techniques of postmodern dance, CI is the theme of iDance Festival, a week-long program featuring workshops, roundtables, and performances; “i” stands for improvisation.  As dancers cast their shadows onto the earth image, I could see three layers compressed in one: bodies upon their shadows superimposed onto the earth image. The resulting illusion crushed the distance between dancers to a point where they re-emerged as one: hand in hand, shoulder to shoulder,


This visual metaphor wasn’t meant to be a simplified conclusion that humans are automatically connected by globalization, however. In fact, dancers went on to enact two scenarios that suggested otherwise.


Two men stepped inside their respective window frames positioned side by side, much the way Hong Kongers come home to their shoe box-sized apartments.  Apparently curious about each other, one peeked over and the other eavesdropped against the wall, but they never talked or exchanged a smile. This is exactly what’s happening in faceless metropolises like Hong Kong, andTokyoandSeoulwhere the overseas dancers are based. City dwellers instinctively want to connect with their neighbors, but when they do bump into each other in the elevator, they stare at the ceiling busy counting the floors. The scene reminded me of the Chile Pavilion at the Shanghai World Expo 2010.  Thousands of shot-through-the-window photos of modern apartments surrounded viewers; the voice over repeatedly asked “Do you know your neighbors’ name?”  Urbanization has brought our homes closer – the space of four tatamis for one inTokyo, to be precise – and our hearts?


The second scenario opened in French.  Bacque, pointing to the sky, whispered “la luna” which sounds similar to “Are you gay?” in Cantonese.  She was greeted with an angry “I am straight!” by the apparently humiliated Cantonese Force Fong.  Frustrated and bewildered, Bacque turned to her favorite word “la danse”, only to provoke Cantonese Victor Ma’s direct phonetic translation of “transporting shit”.  Then came Japanese, Korean, Mandarin…  The disoriented Mandy Yim ran around the stage crying “What?! What?!”  The multi-lingual audience broke into laughs over the cross- cultural miscommunication.


This was a gasp of fresh air for the crowd who, sadly enough, have labored through the show frowning. They have been ignored by the dancers who seemed only concerned about interacting amongst themselves. Not for a moment did they improvise with the musician, singer, or lighting designer, needless to say audience.  Granted, some might argue that CI, as a dance technique, only applies to dancers. And it is only common sense that audience sit still and watch.  These deeply- rooted assumptions become unspoken therefore unquestioned. Self-evident and self-explanatory as they might appear, artists upon whom the mission to mobilize social change is bestowed, should challenge them.  After all, they are the privileged few with the power to redefine borders, re-model structures, and reposition perspectives.  This is especially relevant in an experimental performance that preaches spontaneity, in a week-long festival dedicated CI, and in a black box created specifically to disrupt theater conventions.  And audience did expect something out of the box.


Audience is what brings performing arts to life. In other words, it is the interaction between performers and audience that gives energy to a live performance.  Likewise, improvisation ascertains the evanescent nature of dance- it will never happen again, so both parties had better seize the magic of fleeing moments.  After unchaining dancers from prescribed choreography, can CI not free their audience as well?  By collaboratively and spontaneously creating the show, the two parties, traditionally separated on and off stage, can escape their “prison cells”, thus opening the theater experience to infinite possibilities.  This is the soul of improvisation after all.


The power distance between viewers and performers is constantly being negotiated.  In movie, for instance, the viewers’ gaze is said to reduce the performers i.e. beautiful women, to sex objects; hence the theory of male gaze and objectification.  In performing arts, by contrast, the performers usually take the lead and viewers are primarily passive onlookers.  With CI, however, the two parties can well share the limelight and collaboratively create unprecedented opportunities for breakthrough.  It takes two to tango; we can take turns to lead, or even lead at the same time!  As Bacque stressed “It’s about you and me”, improvisation presents a new hypothesis on the interpersonal dynamics in a theater setting, a mirror reflecting the real world. It is open to experiments just as art is an open text subject to multiple interpretations.


Truth is, CI provides an ideal platform for exploring the theme of human relations. Contact is all about “what’s happening between you and me”. When we become close friends or fall in love, we say “We share a special connection”.  When we part, we say “Let’s keep in touch.”  Be it contact, touch or connection, the “human touch” is key in both every language and dance vocabulary.  For dancers, contact inspires pair/group movements which- due to its unscripted nature, requires a little extra: deeper trust in each other and an open mind to embrace spontaneity.  For audience, contact disrupts the conventional mode of spectator behavior, transforming them from detached, passive onlookers into engaged participants: to move so as to be moved, to touch so as to be touched.


However, contact between dancers and audience was non- existent in this performance which ended up essentially lifeless.  Does this miscarriage reflect perhaps a lack of trust between them?  Or a less- than- open mind to celebrate spontaneity? That’s why we keep a safe distance, cocooned in our comfort zones.  But how are we supposed to connect if we don’t even interact?


By comparison, the improvisation dance of Parallel Space (Fringe Club, 2011) successfully transcended the border. The lead dancer crawled to the front row where a banker- looking viewer in full suit and Giorgio Armani glasses busied himself reading the program, seemingly unaware of the approach.  Fingers climbing up his pants, the dancer suddenly snapped up the program and tossed it as far as he could, “Are you here to watch me or read the program!”  A wave of knowing laughs swept across the theater.  I, who fervently protest against reading programs before the show to avoid preconceptions, clapped as loud as I could.  The praise was meant for such daring challenge to Hong Konger’s “one definitive answer” mindset: “What’s the story? What’s the message? The answer must be spelt out in black and white in the program!”  But now that the spotlight is on you, thus you become part of the improvised answer, what do you do?  This shows how CI can unscrew a closed mind.  In fact, Yim attempted similar improvisation at iDanceTaipei last year. I wonder why it disappeared this time…


Of course, the water needs to be tested. Performers can easily gauge if audience is receptive of what I’d call “collaborative improv”.  A simple sing along gesture for example, can stir the crowd; and by observing their reactions, performers can identify potential targets.  In fact, the 8 dancers did form an impromptu orchestra with their hands clapping and feet stomping- only the band didn’t move offstage.  Perhaps a small dose of catalyst would have stimulated a great deal of “happenings between you and me”.


“Do you understand?” Bacque interrogated me for one last time upon completing our interview, “It’s all about what’s happening between you and me!” her cheeks red with excitement, her pupil dilated, her fingers now entwined with mine.  I do, but millions remain ambivalent toward the “human touch” – both performers and spectators.  Touch has provided the standing point for CI dance, can it then pave way for an open mind?