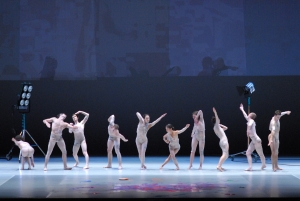 Review of Shenwei Dance Arts at the New Vision Arts Festival
Silhouetted by theatrical lights, his tight- fitting black suit and grey capri pants outlined the man.  Standing still, watching, listening, he breathed in everything happening on and off the stage. This was Shen Wei at the New Vision Arts Festival.  Starting with Chinese opera at age 9, the now full-fledged artist boasts talents encompassing dance, painting, film, theater and design.1  His New York-based company performed two works at the Cultural Center on November 16, 2012, Limited States and Illuminate (world premiere).


Limited States opened with a video projection: a female soloist on screen leading a group of nine on stage. Honoring circularity, Shen’s trademark choreography, the call- and- response  developed into a frolic of limbs and torsos in flows, slices, ripples, and curves. The scrim divided the stage into front and back, creating the illusion of an alternate world.  Positioned on both sides in matching numbers and groupings, the dancers were faced with two “selves”: one on screen and one behind.  Engaged in similar but never identical moves, the three egos seemingly undertook an examination of the sub- consciousness by the consciousness.


The dialog between sub-consciousness and consciousness was key to Action Painting (a style of painting where the physical act of painting is emphasized 2), which the choreography evolved into.  A female soloist dipped her arms in orange acrylic, then rolled her limbs and folded her torso on a white patch.   As she counted from 0 to 12, the 2x2m square transformed into a live canvas and her body into a brush with a will, producing a Jackson Pollack- style painting.  The painting gradually came to life with her spinning toes and sprawling hands leaving behind asymmetrical loops and dynamic lines.  Just like Action Painting, colors were spontaneously dribbled, splashed or smeared, instead of carefully applied.  A self-taught painter, Shen thus explored energy and motion on canvas; it generated a tangible and lasting expression of creativity, complementing the evanescence of dance.


After the intermission, audience moved into the Foyer for Illuminate.  The site-specific piece commissioned by the Festival unprecedentedly explored the indoor public space, breaking theater norms. 1  The floor was marked by tile-like dance space in circles, squares and irregular shapes; inside them lay paints, net, hair and white patches.

Surrounding the venue stood three transparent boxes and a ramp up to a pool of colors.  Dancers continued their contortions with more of Shen’s signature sweeping arms as calligraphic strokes.  Two men locked themselves in a box, sliding on acrylic as if playing hockey, smearing the walls with orange and pink.  A lady climbed almost 10 meters into a box full of black plastic balls; as her body dyed them yellow and green, they bounced in ecstasy.  As compelling as this visual feast was, I remember most vividly the sound of friction produced by human flesh applying paints onto various surfaces: the grainy, the shrill, the scratchy, the gurgling.  Even with my eyes closed, I could “hear” the different textures, visualize the intimate touch between naked skin upon various materials, and feel the nuances of their relations.  This was not the type of palsy- walsy permitted in conventional theaters.


Indeed, Illuminate was about intimacy, despite the vast space it took up.  We were released from our seats to browse on the dance floor, and the performers stood shoulder to shoulder with us, literally.  Here came the transformation in our physical relation: “By stepping onto the stage, the audience share the performance space with the dancers, resulting in total immersion.  Now they are feeling the work with their hearts, instead of analyzing it with their brains seated high up in the stalls.” says Shen.3  Manipulating and dramatizing space is not a problem for the man who pioneered such personal viewing in Undivided Divided staged at a 55,000 sqft Drill Hall designed for military parades.  Under his baton, we were liberated from our usual cocoons, empowered to decide who to look at, when and from which angle to watch them.  As we stepped inside the dance, we became surrounded by the emotions of other viewers and the energy of dancers.  Close enough to smell each other’s aftershave, the emotional contagion heightened our senses which, in turn, boosted the work with our own energy.  “In the end, you deliver some of your energy to another human being.” says Shen. 4


Albeit full of energy, both pieces were series of abstract vignettes hardly linked by any logical relations.  In fact, some may argue that the tidbits were so disconnected that the entire piece felt more like random sketches than a coherent whole.  The audience went home confused and disappointed.  But is logic even relevant here?  Do we really have to “understand” everything?  The exclamation of  “I don’t get it!” (or “唔明” in Cantonese) is often heard from those who reject contemporary dance, or art in general.  Likewise, the top three questions posed by local audience to artists are:


The underlying assumption is that there is indeed a one- and- only interpretation to an open text.  Ironically however, the degree of openness is the most common benchmark that qualifies good art.  Shen offers his answer, “Modernity has steered our judgments toward utilitarianism. We are obsessed with rationalizing our actions and justifying them as meaningful.  Otherwise, we feel very insecure without a definitive answer.  When we see a bottle, we analyze whether it can contain water, but we never admire the beauty of its shape.” 3


Dancers’ beautiful shapes came from Shen’s craftsmanship of moving sculptures. This was another similarity between the two pieces: dressed in nude- toned unitards and wearing white paint on expressionless faces, dancers appeared like Rodin sculptures that had come to life.  The multiple potentialities of bodies as canvas, paintbrush, jigsaw puzzles etc justified the minimalist costumes.  “My work is a celebration of the human body, why cover such beauty?” 5  Nudity to me is a visual metaphor for origin, for instincts, and our basic senses stripped of all the preconceptions imposed by modern society.  Naked both physically and mentally, we can now view the world with pristine eyes, and appreciate it with raw senses.


Dance performance is a fusion of multi-sensory stimuli.  In tonight’s two pieces alone, the cross-disciplinary artist is attributed for “concept, choreography, video and animation design”, “lighting design” and “costume design”, creating a total experience for all our senses.  It’s no surprise that he sees modern men, with larger brains yet less acute senses, as a degeneration – mankind’s one step backward under the illusion of modern advancements.  This state of self-limitation was reflected at the end of Limited States: all 17 dancers lined up tightly, touching only each other’s genitals; their movements resembled sexual intercourse.  Curiously, unlike in a chart of human evolution, they were facing left which implied reversed chronological order.  Instead of progressing from chimpanzees to men, they appeared to develop backward with the final dancer looking weakest, bending down as if unable to straighten her neck, back and knees.  Where are we heading toward?  This was an antipode of evolution, and indeed Shen’s criticism of modern men’s declining senses.  As we increasingly rely on science and technology for “rational” judgments, we put less trust in our sight, hearing, taste, smell and touch, until ultimately we lose the fundamental ability to feel with our hearts.  For those who have to make sense of everything, perhaps they can start really advancing by nurturing their senses with art.