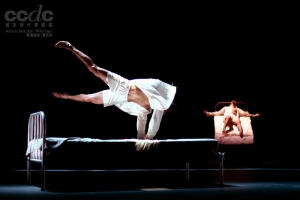 Discords that sounded like a piano with cracked soundboard and a double-bass with broken strings, glaring side lights that illuminated dancers’ shaking hands and twisted faces, floppy black suits and bowler hats that concealed their identities and emotions, a dangling ceiling that mis-aligned with the stage…  From music and lighting, to costumes and sets, The Comedy of K exemplified a dark, sneering satire. “City Contemporary Dance Company” re-staged Helen Lai’s dance theater on December 8, 2012 at Kwai Tsing Theater (premiere in 2004).


References were made to his well-known story The Metamorphosis, where a middle-class salesman named Gregor Samsa wakes up to find himself transformed into a cockroach, and subsequently dies as he gradually loses love from his family and society at large. 1


Gregor’s transformation opened the show: 12 dancers clustered at center stage, calling “Gregor, Gregor, Gregor…”, sneering, whispering and teasing.  Their object of amusement was a young man on the floor, naked, fearful, shivering and twitching.  The standoff was that between the majority and minority, the powerful and powerless, revealing mankind’s instinct to exclude those considered different.


Labeled “abnormal”, the minority are usually reduced to patients, or even criminals.  Take, for instance, Gillian Lynne, choreographer of Cats and Phantom of the Opera.  As a child, she was considered “hopeless”; the school told her parents that she had learning disorder and advised medication that “helps calm her down.  She was, luckily enough, discovered to have dance talent later.  As often as we equate the mental activity of thinking to the physical act of sitting at a desk, there are people who have to move to think. 2 Their only crime is being the minority, social outcasts just like Gregor.  Choreographing Comedy during SARS in 2003, Lai also witnessed the social alienation inflicted upon the infected like punishment for a crime they never committed. Majority rules.


To silence the minority, authorities set up hospitals and madhouses to “care for them” or “treat them”.  Usual tactics include: chronically vague diagnosis by drawing ambiguous lines between passion and insanity, anesthesia that supposedly calms nerves but actually hypnotizes the brain, portraying the minority as “corruptors” in front of the docile, ignorant masses etc.  As Michel Focault observed, madhouses were established specifically to confine artists, gays, libertarians, intellectuals, genius – anyone who might disrupt the existing social order. 3 Doctors’ task was to reinforce the sense of normality by either converting the “abnormal” or destroying them, thereby eliminating any risks to the status quo.


This power struggle was dramatized with modernist music composed by Jews from Central andEastern Europe.  The downscale variations and repeated sequences cut short at the end conjured up images of quintuplets: the oldest boy, healthy and strong, abandons his brothers and sisters, each born with a missing limb.  The witch-like solo portrayed a common scene at the madhouses where one patient gets tied up in chains by four 200-pound men.


In contemporary China, the Cultural Revolution exiled millions of intellectuals to factories and farms to stabilize Chairman Mao Ze-dong’s regime. With the Communist Party representing workers and peasants, the white collars were either normalized to become their comrades, or, if be unconformable, killed as dissidents.  A mirroring scene in Comedy saw all 12 dancers march in military-like uniformity, their identical black suits so floppy that I couldn’t tell boys from girls, and bowler hats so low that I couldn’t tell smiles from tears.  Identities concealed and emotions repressed, individuals were stripped off their humanity.  As the minority get assimilated or eliminated, it becomes much easier for the ruling class to exercise control.


Fitting in with family, society and church was a life-long battle for Kafka.  A German-speaking Jew in Pragueduring Emancipation, he struggled with both religious and ethnic identities, “What have I in common with Jews? I have hardly anything in common with myself and should stand very quietly in a corner, content that I can breathe.” 4 Neither did his family make him feel at home, “Enclosed in my own four walls, I found myself an immigrant imprisoned in a foreign country… I saw my family as strange aliens whose foreign customs, rites and very language defied comprehension… Though I did not want it, they forced me to participate in their bizarre rituals… I could not resist.” 5 Diagnosed with Schizoid Personality Disorder, suicidal tendency, eating disorder and confused sexuality, he clearly did not fit in.


Frowning upon his writing pursuits, Kafka’s father had prescribed for him a typical middle-class path to success- a hat that didn’t fit.  As if to blend in with the 200,000 bankers in Central, 12 dancers emerged as the stereotypical faceless businessmen, modeled upon Rene Magritte’s painting of men in black suits and bowler hats. 1   Lined up in square shape, they paraded like soldiers, crept like thieves, prayed like sinners, then disbanded into rushing hordes.  A hat fight ensued: the male soloist caught a hat thrown from backstage, tried it on, decided it didn’t fit, then tossed it to another dancer.  The sequence repeated 12 times like musical chairs.  At the end, everyone got a hat he discarded while he seemed satisfied to have finally found the perfect match – without realizing that they are, in fact, all the same.  This parallels the frequent job changes by youngsters who boast a clear goal; yet soon they will diminish their individuality to fit in with society, realizing that diversity and choices are merely illusions.  As members of the organized labor, one is only good for a money-making robot, therefore, uniformity is supreme.


On the other hand, Gregor, after playing multiple “conformed” roles of an obedient son, a giving brother and a workaholic employee, finally turned the focus on himself: what does he want?  Who is he? Unable to find an answer, he died in mystical transformation.  His death was both suicidal – as he chose to starve, and homicidal- as his family abandoned him; the former triggered by the latter.


The monochromatic reality was painted in black and white, black suits, hats and ties in contrast with white underwear, shirts and bed.  Few other colors were employed, just as no grey area is allowed between good and evil, no independent thoughts alternative to the dominant discourse, no challenge to the ruling elites.  Renowned filmmaker Peter Chan disclosed that The Godfather was heavily censored on the mainland, particularly evidence of him being a good father and a loyal brother to his mafiosi.  A complex 3D character open to multiple interpretations?  No, a gangster is to be evil under all circumstances.


Authoritarianism reflects the insecurity of human existence, the central theme of Comedy.  It is universal; perhaps most relevant to us isHong Kong’s positioning in a post-handover context: do we indulge in British colonial nostalgia, or become mainland shoppers’ backyard?  As our Asia’s world city gradually loses toSingapore andShanghai, it’s high time we pondered where our competitive edge lies.  As loudly as Chow Chun-fai’s “I want my identity back!” echoes, few hold the answer to exactly what this identity is.