【專題】評論，可說的和不可說的
Everything could be Said, but in Context and Tight Framing: Opinions on Arts in the Digital Sphere
文：Dr Chua Lian Choon (Richard)

Recently, shortly after the Singapore general election, a 2010 tweet of Singapore veteran blogger Xiaxue was reported to the local police for being racist. It was done in response to her comments that anticipate the then political candidate of a Singapore opposition party Workers’ Party Raeesah Khan’s future attitude towards Chinese in Singapore after her election into parliament. Her 2010 tweet was allegedly targeting migrant workers in Singapore.1 Subsequently, Xiaxue attributed the action to the rife of Cancel Culture by folks who are “woke”. In recent times, Cancel Culture refers to a movement to call out offensive behaviour. Individuals who are “woke” are those who are alert to injustices in society, especially racism. She defended herself as a victim to this movement and would not be bullied into silence. To her, freedom of speech has been curbed. More specifically, she felt that her opinions were not given free airing. Backlashes from the zeitgeist of the day oppressed her. The oppression resulted in her losing commercial sponsorships. To her critics, Xiaxue has been a controversial social media influencer in Singapore. She has been forthright in her comments, too direct and bordering irresponsible speech towards social issues such as race. To Xiaxue, she was honest and true to her character and beliefs.

This drama played itself out on social media. Besides netizens who took sides with her or her critics, mainstream and alternative media reports on her case appeared side by side netizen comments. Freedom of speech on social media ensures open and fair expression. However, there is very little discussion about their state of affairs moving forward. There is a lack of context and framing to the barrage of opinions online. Nobody has been organising, contextualising and framing the materials for constructive discussions, especially on difficult topics such as race in Singapore.

Indeed, it is difficult to do so when emotions are running high. The same applies to writings about performing arts in Singapore. Negative comments are frowned upon. The unwritten rule is that criticisms should be encouraging and constructive. Criticism in Singapore has developed along those lines. From Citizen Reviewers incubation programmes under Centre 422 to dedicated performing arts writing courses in the National University of Singapore,3 reviewers and critics are reminded to develop “a practice of empathy and generosity that is also fierce and unflinching” (Tan, 2019). Empathy and generosity provide safe spaces for constructive discussions. However, “fierce and unflinching” criticism triggers emotions, for it is about the power of one opinion over others.

In the age of social media, where opinions are free and in abundance, how would a reviewer and critic use materials available to contextualise and frame a conversation around a particular performance while contributing their own take on these performances? Not to mention taking into consideration the zeitgeist of the day, the power it wields on anyone with a different view. One could just write about the production and nothing else. With focus, they could just talk about the narratives and aesthetics of performances and the craft of creative teams for an informed audience. But for a general reader, a reviewer and critic would have to go a step further to find points of relevance for them. Writing reviews and critiques for different audiences is challenging. More challenging is relating art writing to contentious issues of the day.

This challenge is complicated by many nuances highlighted by educated and informed individuals online. As much as nuances in discussions provide perspective and added knowledge, but contextualising and framing them in a review or criticism are skills needed for future critique writing. Another immediate problem in Singapore criticism is the lack of writers. Art writing has become a daunting task in the country.

A lack of writers in criticism does not mean that there is a lack of criticism in Singapore theatre. Opinions from practitioners, friends of practitioners as audiences, performing arts educators, practically everybody, are accepted as informed perspectives. With this buffet of information available online, practitioners could strategically pick and use those that benefit them. They do not need reviewers and critics to give them a “good review”. They could do so on their own. Strategically, some reviewers choose to write more positive and encouraging reviews in order to earn citations.

This calls for a reflection on whether reviews and critiques are still relevant today. Or, reviews and critiques should take another form for new times. The institution of theatre criticism has been disrupted and challenged. Informed individuals on social media lead opinions in cultural issues, including the performing arts. Each individual is a reviewer and critic in their own right.

This democratising of opinion making brings about loose collectives of opinion makers. These opinion makers come together to share and discuss their personal preferences. However, most of them end up as echo chambers instituting narrow views and opinions. To me, this is the danger of criticism in Singapore.

To see Singapore as a state of cultural censorship is just the tip of the iceberg. While the Singapore arts community responds to state censorship in many different ways, resistance is mostly individual efforts. Collectively, the arts community has limited strength to effect change. Many conversations take place in silos, or to quote Bourdieu’s term, their own Habituses. These habituses—or small groups of individuals—do not go out of their way to link up with other habituses. One possible reason is the lack of a framework and language to do so.

From my ethnographic observations online, especially social media posts of Singapore theatre practitioners and friends who are theatre enthusiasts, I tend not to learn new knowledge. Opinions in the form of emotional outbursts not only do not push discussions forward, but also trigger negative emotions among fellow practitioners taking the opportunity to air their grievances. Their outbursts are not different from netizens reacting to the beleaguered Singaporean blogger. Upon closer look, there are gems of potential knowledge. Unfortunately, they are underdeveloped and die off as times go by.

The biggest challenge facing Singapore criticism is individual's inability to put aside their pride and acknowledge their weaknesses in providing constructive criticism. Potential writers in Singapore are keen to learn and contribute their knowledge through criticism. Unfortunately they are not as emotionally strong in accepting criticisms. I sincerely hope that more writers could come forward or out of their comfort zone in their habituses to engage in meaningful dialogues in safe spaces, which have been increasingly made available in Singapore. 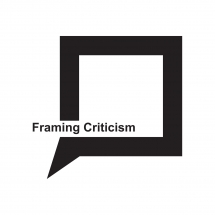 Joining many new initiatives in the Singapore arts scene, Singapore independent arts centre The Substation and the contemporary performance think tank Theatrex Asia have co-founded Framing Criticisms. The initiative aims to gather anyone who is interested in the arts in Singapore to converse with each other, in a hope to find common frameworks and languages to sustain constructive dialogues and knowledge production for the Singapore arts scene. Through open public dialogues, conferences and focused workshops, Framing Criticisms will construct framings based on relevant contexts to facilitate fresh conversations on existing and prospective issues.

Finally I would like to extend the idea of such engagement further to the theatre of social media Singapore society has been exposed to. The contentions among different ideological perspectives, political stances and personal interests have polarised Singapore society. The state has failed to bring people together, for legislation is not the best tool to reconcile emotional and ideological differences. Although the outcome of the police investigation on Xiaxue has not been made known to the public, no matter what the outcome may be, conversations and opinions on race will continue to strain Singapore society. It is not the topic that is out of bounds, but the way and means conversations on these sensitive topics are being carried out. The Singapore government has extended an invitation to researchers to look into this issue. Data-driven findings and recommendations might help with justifying future actions, but intercultural conversations that are built on mutual trust would propel discourse forward to collective benefits.

Chua’s research interests lie in Chinese theatres in Singapore and Malaysia, theatre ecologies and culture, performance and politics, entertainment arts, and online arts criticism and media. Interdisciplinary in scope and method, he attempts to make sense of how performance theories could be used to implement new action researches in weaving performances. Holding a PhD from the University of South Wales, together with theatre collective World-in-Theatre, online media Theatrex Asia and Wuwei Performance Series (Performance Art), he continues to embark on researches through curating performances and organising performance events, as well as writing critiques.

1 More details on the case could be referenced here: https://bit.ly/police-report-xiexue