The girl held tight to the neck of her lover, the man leaned back to support her. She flew in the air in extreme joy.

This image stayed reminiscent long after I left the performance.

This powerful image of lover’s embrace was created by the internationally renowned French artist Yoann Bourgeois, whom with his partner Marie Vaudin, were invited by ArtisTree, as the Finale program in their newly curated dance series ‘ArtisTree Selects: Moving Pieces’.

For this Asian premiere, Yoann has brought for the Hong Kong audience five of his celebrated works: Culbuto, Dialogue, Fugue/Table, Hourvari and Fugue/Trampoline in the performance Tentative Approaches to a Point of Suspension.

Yoann describes himself a dancer, an acrobat, an actor and a juggler, but he likes best to call himself a ‘joueur’ (‘player’ in French). Throughout his artistic life, he has experimented with different theatrical devices, and played with the force of nature: gravity, action/reaction, balance, centripetal force and more, and marrying these scientific languages into his mesmerizing art works.

The moving still of the lover’s embrace is one of the captivating moments in Houvari (Turntable), one of the most touching works in the performance.

It all started with a large turning platform. Yoann and Marie stood facing opposite each other at the corner of the square platform, and started to lean forward as the turntable started to rotate. The couple leaned even more and stretched their arms towards each other as the turntable picked up its speed. The invisible connecting line in between showed the longing of touch of the lovers. They started approaching each other, the slow leaning walk created snapshots of two running lovers, cannot wait to hold each other in their arms.

With the proximity of the audience, the loud mechanical spinning sounds and the generated current by the turntable, all added to the tension of the narrative. Audiences were all exclaimed by the evoked slow-motioned imaginaries under the expeditious turntable.

They finally met, yet departed swiftly. On every tight moment of encounter, with the person staying, and therefore taken by the turntable, the encounter broke. One needs to keep moving on the platform. This created a metaphor for any relations in the road of progress, once anyone starts to stay on the spot, the relation has a large potential of separation.

Until at one point, they finally touched. The man started to embrace the girl in the air, creating a cinematic frame-to-frame motion of the captivating moment of romance.

Life went on. They departed. The girl looked away from the man. With the subtle changes in their expression from happiness to sadness, forecasted their separation again; their holding hands slowly drifted apart.

Upon the loss of the loved ones, both ran fiercely on the turntable. The stamping sound made by their feet blended with the mechanical sound; desperation of the couple in separation was effectively added to the narrative. Until both finally calmed down, went back to their original position in the corner of the turntable, looked at each other, reminiscing of their first moment of encounter.

This simple idea of approach and departure, with perfect techniques created a touching text of many love stories, and capturing a lot of the audiences’ heart.

With the closeness of the work with the audience, the collective energy helped to complete the work. I could sense people sign together. I saw a male audience member opposite me opened his mouth in exclamation, and the girl by his side closed her month with both her hands when the couple was running. I was very touched by the work, and I could sense audiences shared the emotions, and seeing some of them clearing their tears.

Fugue/Trampoline: the Existential State of Men

Fugue/Trampoline immediately followed Hourvari, was another touching piece in the performance. Starting with a staircase and the trampoline, playing with the scientific notion of fall and recovery, action and reaction, it expressed the existential state of a human being.

Under the serene music of Debussy’s Clair de Lune, Yoann stepped up the stairs to the raised platform. A man just lost his love, walking shaky. The physical shakiness revealed the internal psychological instability. Stepping on the platform, he soon fell off the ground. Re-bounced by the trampoline, he proceeded with his walk, he fell, and recovered, once, twice and many more times. Again, did it not tell the essence of a life journey? You fall, you recover, you proceed, you fall again, you recover, a never-ending story to reach the height of your goal, yet is that the ultimate destination? Is it not like Sisyphus, the repetition of life is the answer already?

Finally, Yoann reached the top of the stairs, back facing the audience; he turned his head and looked afar. How the audiences wanted him to stay at that point, although he chose to fall down, as if someone has chosen to complete one’s life, tired of the repetition of the mundane life and the unpredictable future. This ultimate drop soon bought him all the way down to the base of the stairs and lied on the floor. This sad ending marked the end of the piece and of the whole performance. 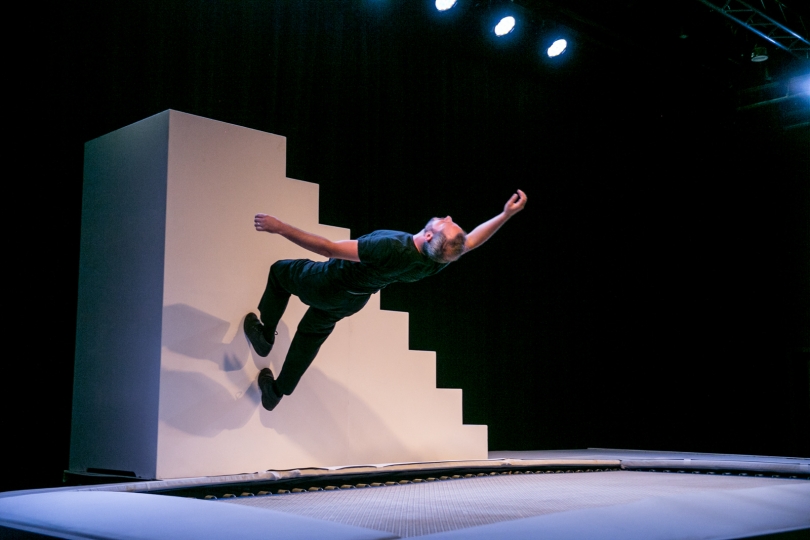 The former three pieces Culbuto, Dialogue and Fugue/Table also successful embraced the audience into the world of Yoann and to familiarize them with the beautiful ambience and language of his works.

Culbuto (Roly) marked the beginning of the performance with Yoann rolling a roly emplacing Marie towards the crowd in a public area outside ArtisTree on the bridge. Marie, positioning in the centre of the crowd, swung her body from side to side, reaching to the sky and towards the audience, wanting to greet them, or was that a request of help to release her from the entrapment? She drew the arc of longing. Her angelic face with a tint of naivety expressed her helpless loss of subjectivity. The final drop of the whole body on the floor revealed the disappointment of her continuous attempt. 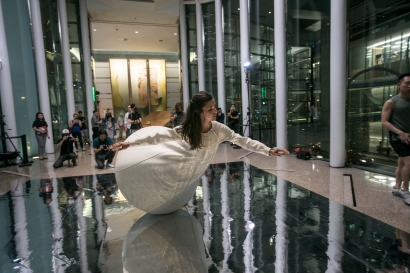 In Dialogue, Yoann and Marie climbed over a one-legged raised platform, trying to find a common ground of existence. Every slight movement of one will affect the other, every move needed to be extremely tactful. The scientific notion of balance is transferred into a metaphor of fragility in every relationship. The couple finally reached the point where they sat opposite each other, yet with the weary adjustment throughout the process, they could no longer look the others into their own eyes.

The theme of fragile relationship continued with Fugue/Table inside ArtisTree. The couple sat opposite each other by the table. Their hands entangled, released, pushing the other, holding the legs; this rhythmic created dance expressed the vehement struggle of a couple in a domestic setting, trying to manipulate the other, shaping them into your desire and fighting for dominance in relations. The fight continued with more dramatic struggle with the bodies over the table, resulted in the physical destruction of the chairs and the table, which was also metaphorical. 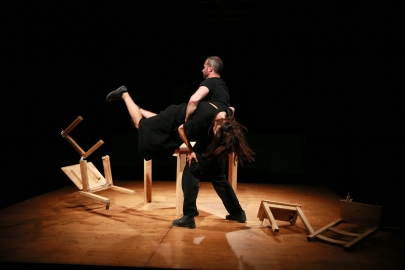 Surprises, humor and beauty completed all the works, filling the audience with exclamation and contemplation.

The five pieces, as also performed in many international venues, could be appreciated separately. As in the arrangement with the Panthéon in Paris where they are performed in scattered space at the same time, allowed audience to make their own connections. Although in this performance, with the clever linear sequencing arrangement of the five works, one could also make up another completely new narration.

In Yoann’s practice as a juggler, he is always amazed by the notion of the “suspension point”, the brief moment before an object or a body falls from the highest point after threw up, and this is the exact point he would like to capture in the work - “the peak before the fall, the moment weightlessness, the moment of immortality”. He also discovers that with the force that he is working on, instead of resisting to it, he needs to give in at times. This gives shape to the philosophy of his works – with the nature of force that is enacting on us, one could “do nothing and just let things happen, as long as we can focus on this moment of balance and live in the now, we are going to be fine”.

Milan Kundera writes in Immortality ““The purpose of the poetry is not to dazzle us with an astonishing thought, but to make one moment of existence unforgettable and worthy of unbearable nostalgia.”. Yoann’s works in capturing the moment of immortality creates this exquisite poetry that brings the audience to this moment of truth.

《Tentative Approaches to a Point of Suspension》