A century ago, writing in the persona of a misunderstood, fictional poet, the modernist Ezra Pound ruefully remarked upon the pressures on the artist to conform to convention, rather than upend it. One hundred years later, we expect nothing less from art, but what is not so clear is what we can look forward to from the generations born in the wake of postmodernism’s ironic gaze and inheriting a world of unprecedented global crises.

If the new approach looks anything like the metamodernist cultural philosophy that has been ascribed to millennials, we can understand it in theory as an “oscillation” between “a modern enthusiasm and a postmodern irony, between hope and melancholy, between naïveté and knowingness, empathy and apathy, unity and plurality, totality and fragmentation, purity and ambiguity”.[1] In practice, this “‘both-neither’ dynamic” sounds aspirational at best, and yet the sense of longing that underpins it informs three of the trends that I see emerging and that I anticipate we will see more of in 2019.[2]

Is This A Room: Reality Winner Verbatim Transcription (Photo by Paula Court)

The first of these is engagement: theatre about politics is coming into its own in the context of Black Lives Matter, the Me Too Movement, and Donald Trump’s presidency, and its success lies in its hands-on approach to the issues of the day. The breakout hits of the fall 2018 theatre season in New York all took current events or political institutions as their subjects of investigation, and examined them with admirable dispassion. Writer and actress Heidi Schreck’s What the Constitution Means to Me, currently in an extended Broadway run, applies precisely a metamodernist “pragmatic idealism” to the stymieing problem of interpreting the US government’s 18th century founding document for the country’s 21st century institutions, in this autobiographical monologue that is also a civics lesson. The other surprise hit came from New York’s experimental theatre scene—a scene that is often dripping in postmodern sarcasm—and one of its leading (i.e. most obscure) artists, playwright Tina Satter. Is This A Room: Reality Winner Verbatim Transcription, performed by Satter’s company, Half Straddle, proposed a muscular and chilling, verbatim performance of the F.B.I.’s 2017 arrest and interrogation of Reality Winner, the military contractor charged with leaking classified information about the Russian hacking of the 2016 US presidential elections. Satter’s choice of an unusually realistic subject, as well as the show’s success, speaks to a desire to see past media interpretations of events to examine the events themselves. Adopting a similarly unvarnished approach to the news, playwright and director Anne Washburn evaded the satire trap that artistic examinations of Donald Trump and his family usually fall into, by imagining something as simple as an honest conversation among a group of young liberals about the policies of the Trump administration. It is interesting to note the surprise that greeted Washburn’s sincerity when the show premiered at London’s Almeida Theatre in February 2019.[3] 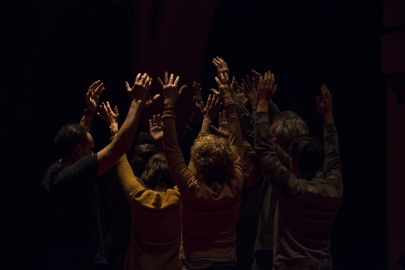 The Fever (Photo by Maria Baranova)

Unlike political theatre, which performs an artist’s reactions to politics, theatre about politics directs itself outward to address the concerns of audiences. The second trend I think we will see more of in 2019 is therefore a renewed interest in spectatorship. At a public talk organised by the Hong Kong Academy for Performing Arts in February this year, Robert Lepage discussed how he endeavours to ease the public’s “terror” in the theatre, where audiences are asked to assume a disorienting state of “non-existence” for the duration of the performance. Against what seems like an untenable presupposition, artists are exploring increasingly inclusive theatre practices. A particularly strong example of what that can look like comes from Abigail Browde and Michael Silverstone, who work to create a state of euphoria, or even a “group hallucination”, with non-professional actors and spectators, as the company 600 Highwaymen. Their most audience-centered work, The Fever, is created in situ every night by spectators: a powerful, silent experience of communication and exchange that has been touring internationally since the show’s creation in 2017. Straddling the sacred and the profane, the musician Heather Christian understands the act of live creation as a richly symbolic, cathartic, public ritual; her rollicking, voodoo-tinged Animal Wisdom (2017) proposed a requiem mass and a spiritualist séance for hipster Brooklynites, that both elevated and mystified audiences.

Christian’s work is also in the vein of the third trend I see emerging, which is a desire for the spiritual in performance, or what the metamodernists term a neo-romantic sensibility. This is to be understood as a “lingering between projection and perception, form and the unformable, coherence and chaos, corruption and innocence” in its “inclination toward the tragic, the sublime, and the uncanny”.[4] If that risks looking kooky, in practice it is but, remarkably, it also is not, and no more so than in the hands of its high priestess, writer/director/performer Sibyl Kempson. With an army of actors, musicians, designers, multimedia artists, and all kinds of crafters (practicing everything from kintsugi to knitting), she conceived what must be the most bizarre, baffling, welcoming, generous, mystical, creative, feminist and environmentally conscious site-specific performance work I have experienced. 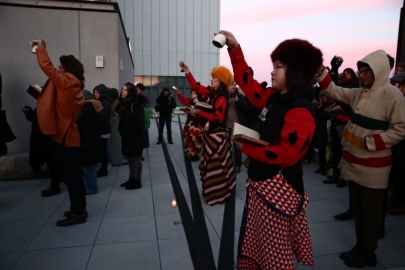 This was 12 Shouts to the Ten Forgotten Heavens, a durational project hosted by the Whitney Museum of American Art and performed in segments at the precise moments of the equinoxes and solstices over a period of three years, with one segment developed into a stand-alone play. More remarkably, Kempson, a US Artists Rockefeller fellow boasting serious experimental theatre chops, and her hyper-cool collaborators offered a full-throated, DIY-designed attempt to “recover ancestral knowledge” through which to “heal our communities”. Each “shout” was intended to create “a contemporary mythology that stands in contrast to recorded histories and religious narratives” about women, while celebrating and respecting the Earth Mother with indoor forests, surreal hirsute creatures, ceremonial fires, ritual offerings, and, for the needs of this almost exclusively female community, a mega-phallus. These constantly moving and mutating segments, whose creative energy seemed barely contained as the performers shepherded audiences through the museum’s indoor and outdoor, public and private spaces, layered an almost unbearable genuineness with flourishes of ironic self-consciousness (for example, the museum’s membership desk served as an “altar” for audiences who participated at multiple performances). Indeed, members of the public were invited and encouraged and they gladly availed themselves of the opportunity to shed phones and schedules (performances often took place at inconvenient hours of the day and night) to enter a time-out-of-time of possibilities and hope. Kempson’s Shouts also pulled off the notable task of transforming the high-art temple of the Whitney into a quasi-holy place of celebration of female power at its most organic; in the heart of Manhattan, on the banks of the mighty waters of the Hudson River, art, aesthetics, beauty, nature and the age-old question of women’s agency flowed into one.

It is pure coincidence that the artists mentioned above are almost all women. Or is it? Although I did not make a decision to highlight women artists, I would argue that a fourth trend is discernible in women’s leadership in the trends mentioned above, which is that it is women who will continue to open new spaces and tones of inquiry in response to the challenges we face in the years to come.

作者簡介：Molly Grogan has covered theatre for over 25 years in Paris and New York, where she was a regular contributor to The Village Voice and served as Off-Broadway Editor for Exeunt Magazine and ExeuntNYC.com. A member of the IATC France chapter, she is currently based in Hong Kong.

[2] My observations are drawn primarily from trends and artists in New York City, where I covered theatre from 2011 to 2018, as Off-Broadway Editor for Exeunt Magazine and ExeuntNYC.com.