【專題】表演藝術遺產之整存與應用
Performing the Library: The “We the Detectives” Project
文：Karin Suni

In April 2017, the Free Library of Philadelphia, the Rosenbach Museum and Library, and New Paradise Laboratories, a maverick Philadelphia theatre company, debuted “We the Detectives”. This programme endeavoured to explore the art of crime and detection through two unique exhibitions and a multifaceted, immersive, and interactive theatrical experience. “Becoming the Detective: The Making of a Genre” and “Clever Criminals and Daring Detectives” drew from the rich collections at the Free Library of Philadelphia and the Rosenbach to bring crime stories front and centre, uncovering what has made this form of literature one of the most enduring and popular. GUMSHOE, a theatrical experience produced by New Paradise Labs, led participants—in person or on mobile phones—through a captivating “whodunit” that raised questions about authenticity, fact versus fiction, and what makes all of us detectives in our own right. 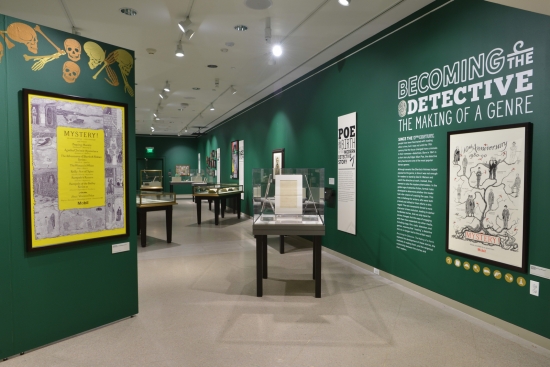 Becoming the Detective (Courtesy of the Free Library of Philadelphia)

This project began with one sentence: “I would like to do an exhibition on the history of the detective story.” From this simple statement, our collaborative partnership developed rather organically. The Free Library, a large, urban public library system, and the Rosenbach had merged a few years prior and were looking for ways to integrate our activities, particularly with the Library’s special collections. To this end, the curators decided to combine efforts and created connected exhibitions. We divided the genre by date, with the Rosenbach covering the early form to Sherlock Holmes, and the Free Library going forward from Edgar Allan Poe’s 1841 tale “The Murders in the Rue Morgue”. Although this created a small overlap in the timeline, this occurred because the Library’s Rare Book Department has the original manuscript of the Poe story and wanted to take advantage of it as it is often considered the first modern detective story. “Becoming the Detective: The Making of a Genre” looked at the relationship between the detective story and its readers and how the development of each impacted the other. The Rosenbach’s “Clever Criminals and Daring Detectives” focused on the public’s fascination with criminals and early true crime tales and how this developed into a similar interest in the people who attempted to capture them, ultimately leading to fictional detective stories.

In the interest of expanding the project’s reach and attracting new audiences, New Paradise Labs was brought in to devise a work that would bridge the two exhibitions as well as encourage more people to visit both institutions. With New Paradise Labs joining the team, a proposal was made to the William Penn Foundation, and we received a $500,000 grant to bring the project to life.

In order to highlight the very act of research as “being a detective” and the library itself as a place of detection, New Paradise Lab’s GUMSHOE production cast audience members as new library agents-in-training (gumshoes) tasked with investigating the mystery of a recently-discovered document by Edgar Allan Poe in order to complete their training. This training took the audience throughout the Parkway Central Library, including into areas not accessible to the public, to discover clues, which they could write down in the notebooks provided to them. They also went through a process of critical thinking and problem solving by working out puzzles and learning about the library, our special collections, the roles of librarians and curators, and the history of the detective story.

There are dozens of lessons that emerged through the development of “We the Detectives” and GUMSHOE in particular. However, the one about the process for deciding the mystery at the heart of GUMSHOE, what the gumshoe trainees would be investigating, is one of the best examples of how all parties involved in the project worked to make the collaboration a success. After a brief discussion about sensitivity to violence, it was agreed that everyone wanted to avoid acts like murder, and the Library was not comfortable with the idea of a theft from its special collections. With these parameters in mind, New Paradise Labs looked to what served as both an inspiration for and connection between the two exhibitions for a solution. The answer: Edgar Allan Poe. The Rare Book Department has one of the largest Poe collections in the world, including a number of original manuscripts. So, the mystery devised was one that centered on what appeared to be a recently-discovered Poe document. The group also had to decide how the document could appear to be genuine for the production, which took place during open hours, but not be confusing to other visitors. A joint decision was also necessary on when the document would be “outed” as a hoax, and how it would be made clear that the Free Library was not a perpetrator of the hoax. Ultimately, the document was placed in a case outside of the gallery, with labels of the same style connecting it visually to the exhibition. There was also a velvet cover over the case containing the document when it was not actively being used during the production.

We had every belief that this project would be popular, but even we were surprised by the increase in attendance to our exhibition at the Free Library. In the almost-six-month run of “Becoming the Detective”, we had 5,228 visitors. This is significantly higher than the next highest exhibition attendance at 3,290, which was a show that ran for nearly seven months and was marketed toward the visiting Mormon community in conjunction with the opening of their new Temple two blocks from the library. The Rosenbach saw a slight increase in their visitors, in part because their normal admission fee was waived for their exhibition.

During the month-long run of 50 live performances of GUMSHOE, 1,500 tickets were booked. All the shows were “sold out” and had lengthy waiting lists. However, there were only 1,030 actual attendees. Tickets were free, which attracted a large and diverse audience, but this also caused a high number of no-shows due to lack of personal investment in the tickets. One of GUMSHOE’s unique features was a mobile-phone version of the production for those who could not attend the in-person performances. The modified experience included sending and receiving text messages and phone calls, hearing recordings of the actors’ voices, and completing some of the puzzles involved in the live version. This phone version allowed an additional 593 people to participate in the show by effectively extending the run by four months, which, because of schedules and costs, would have been impossible to do with the live performance. As is often the case with innovative experimentation, the technology did not always function correctly, which meant that there were patrons who attempted to participate but could not. However, even this problem served as a learning experience for everyone involved in the project. 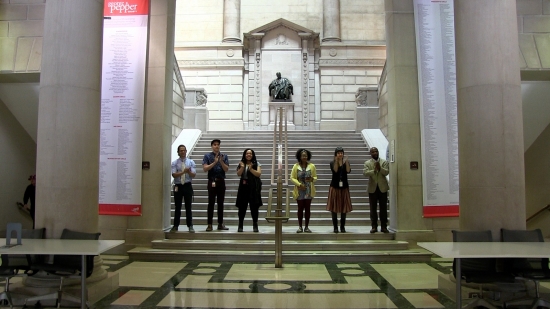 For all of the success that these numbers show, the relationship the Library and Rosenbach staff developed with the actors and creators of GUMSHOE was one of the best parts of this whole project. Another was getting to see their excitement about the library and special collections. Because the characters in the show were librarians-turned-gumshoes, it was important to the artistic process that those involved in the conception, writing, and performance all have a basic understanding of librarianship in general, and specifically, working with special collections. To provide the necessary training materials from both our Rare Book and Theatre collections were regularly brought out in meetings as examples of the kind of material that can be found in our library. It was also explained how these materials are stored and handled, and the day-to-day requirements of a curator’s job were discussed. In addition, there were more intensive “library school” sessions, taught by the curators at both the Library and the Rosenbach, to further elaborate on these topics as well as discuss the creation of our individual exhibitions.

Based on the success of the project, the Library would absolutely do something similar again in the future, especially now having been through it once. Whether in a smaller format or for a different target audience or a different kind of performance entirely, any future project will be significantly enhanced because of the experience of doing “We the Detectives”.

“We the Detectives” was made possible by a generous grant from the William Penn Foundation.

作者簡介：Curator of the Theatre Collection, Free Library of Philadelphia