To talk about present-day Portuguese theatre is to talk about a new wave of texts, authors and directors. Since the end of the 20th century, our theatrical landscape has been characterised by experimentalism inspired by politics and utopian ideas, and new plays mostly written by directors who will subsequently put them on stage. An all-new artistic panorama was born with the end of Estado Novo, the authoritarian, autocratic and corporatist state political regime that had been in force in Portugal for 41 years without interruption, until its overthrow by the Revolution of April 25, 1974. Since then, theatre practitioners have gone all out to become creative and free, and all the thoughts that were before prohibited are now the motor for a fresh dramatic perspective.

In the new dramatic texts that we are bringing out, there is almost always the ambition to talk about the Portuguese political context, or the necessity to produce a utopic world inside the narrative. This is a tendency inaugurated by Jorge Silva Melo (director of the company Artistas Unidos) in 1995, when he wrote António, a Boy from Lisbon (1995). This play, marked by a hyper realistic aesthetic, had started a new way of thinking about reality, text and theatre altogether. The text is a portrait of António, a young man from Lisbon, neither rich nor poor, neither working nor unemployed, nor delinquent, nor framed in social life – only a boy who tries hard to survive. In his 30s, he is a high school dropout, he lives with his brother on the outskirts of Lisbon, he works here and there. These are the days of indecision, the years in which António drags himself on without defining himself in Lisbon, where we live.

The texts we are producing now have this kind of heritage, the necessity to reflect upon the socio-political realities and cultural ideas in a proper way, within texts which seek to talk about the specifics of our context. There is a need to show our stories on stage, and read about them, even if the purpose is the dramatic fiction, which is not reality but more like some utopic material about reality. To talk more about us, about the concerns of our lives, our ways of living and doing theatre.

And that’s why now we are having so many new dramaturgs, who are interested in making their own mirrors of reality on stage. We are in the midst of a rebirth of naturalist thinking, but less committed to reality itself in terms of stage aesthetics, and more concerned with presenting to the spectator the reality in a poetic form, which can sound, somehow, contradictory. 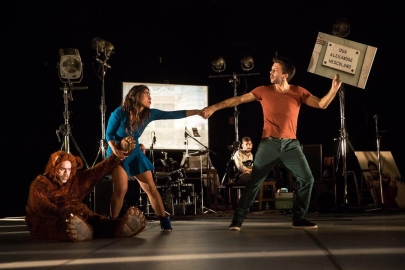 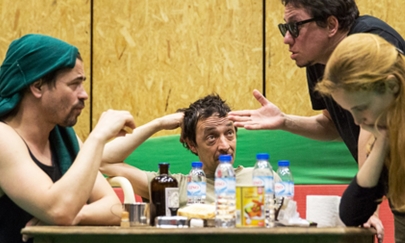 We have a few examples of these phenomena, such as Sadness and Joy in the Life of Giraffes (2011) by Tiago Rodrigues, also director of the company Mundo Prefeito. In this play premiered in 2011, he uses theatre to try to interfere with our perception of not only social and political reality, but also of theatre itself. He does so through the mouth of a child who presents a school assignment and undertakes the encyclopedic task of trying to explain the world. The protagonist is a nine-year-old girl who crosses the city of Lisbon in search of the only person who can help her – Prime Minister Pedro Passos Coelho. In a strange world called Lisbon, you see on stage (and through the text) part of the economic crisis, the heroic adventure of a suicidal teddy bear named Judy Garland, a violinist who is already just a photograph, the school dictionary of Jorge Sampaio, the Bulgarian scientist or Russian playwright Anton Chekhov, and a girl so tall for her age that her mother calls her a giraffe. Plunging deep into the hopeful darkness of children’s imagination, this play (and text) lay bare the fact that children do think about what is happening around them, and that they often feel more strongly about social injustice than adults do.

In a more utopic way, we can analyse the work of the playwright Mickaël de Oliveira, who recently became a director of his own plays. Mickaël de Oliveira has become known in our artistic context mainly through his texts, which have been brought to the scene by directors with whom he collaborates frequently (since 2004, he has worked with John Romão and Nuno M. Cardoso, for example). His writing, which lends itself to being staged, is characterised by the irreverence of the themes it develops, and the convenience and quality of discourse conducive to theatrical play. It was with The Constitution (2016) – a play that boldly asserts that a country can be governed by a single law, sustained by Love – that he first ventured into solo staging. Mickaël de Oliveira also dedicates most of his works to rewriting the classics, constructing links between modern society and the old tragedies, as in Hippolyte – male monologue on perplexity based on the myth of Hippolyte and Fedra, or in Oslo which is full of references to the Orestes tragedy.

These three authors are only a few examples of the Portuguese authorship panorama, where we can find more brilliant minds such as Miguel Castro Caldas and Rui Pina Coelho, who usually work as playwrights for specific directors and companies, always ready to exchange views with directors and actors on their creations.

The dramaturgs mentioned here (who function as metonymic examples) are similar in that they seek to write about the present and for the present, and never forget to use a bit of meta-theatrical language, through which they make clear their thoughts about dramatic practice. And that is why we have at the moment so many new directors also writing their own plays. They are looking for a deep relation between their theatre, their mirror of reality, and their public.

These new directors/playwrights want to show their public how they see the world we live in. It is because their quasi-documentary texts absolutely engage with the time they are writing and staging them, because these plays are so close to reality, and because they make us feel that we could be one of their characters, that we are looking for them. We, as members of the public, are watching these plays and reading them even after the performance has ended, because these texts bring together the author, the stage and the public who are both audiences and readers.

This is happening also because the National Theatre (now under the direction of Tiago Rodrigues mentioned earlier on) sets out to publish texts of the plays they are staging, and to organise playwriting workshops and public lectures on the plays that are going to greet the national stage. All these little efforts, made possible with limited funding, serve to nurture new authors and promote public interest not only by the theatre on stage, but by the theatre in books as well. And it’s amazing to find every year a new author putting on stage some particular words that frame us in a dramatic way.

作者簡介：Performer, dramaturgist and critic of theater, licensed and master by the Superior School of Theater and Cinema of Lisbon, has been collaborating as actress and dramaturgist with several directors and companies of the Portuguese Theatre. She writes articles of criticism and specialty for the journal of performative arts, Sinais em Linha (www.sinaisemlinha.wordpress.com). She is the author of the blog of theater critic The Heel of Achilles (www.ocalcanhardeaquiles.wordpress.com). She is part of Martim Pedroso's Nova Companhia as an actress and staging assistant. Most recently she plays the dramaturgy in the company Propositário Azul. She taught in Theater Degree at ESAD. Now she is attending the PhD in Performative Arts at the University of Lisbon, were she is a researcher in the Department of Martiriology and Hagiography of the Center for Classical Studies of the Faculty of Letters of Lisbon, looking forward a theory about performance and pain.